Computational Laboratory for the Mechanics of Interfaces Civil and Environmental Engineering

DEIP is a MATLAB/OCTAVE toolbox for inserting zero-thickness elements into a continuous finite element mesh in two and three dimensions. These elements are used for intrinsic cohesive zone modeling and for the Discontinuous Galerkin method. The algorithm is topology based and is suitable for complex, unstructured meshes.

New features are periodically added to the code, which currently has capabilities for the following element types:

Test out the code online through the capsule at CodeOcean.com!

The code is compatible with WINDOWS and LINUX operating systems and both MATLAB and OCTAVE computing environments. Additionally, the toolbox contains a small linear finite element program and plotting functions for MATLAB, as well as interfacing scripts for passing data between Abaqus input files, Gmsh mesh files with Code_Aster compatibility, and Paraview visualization files. 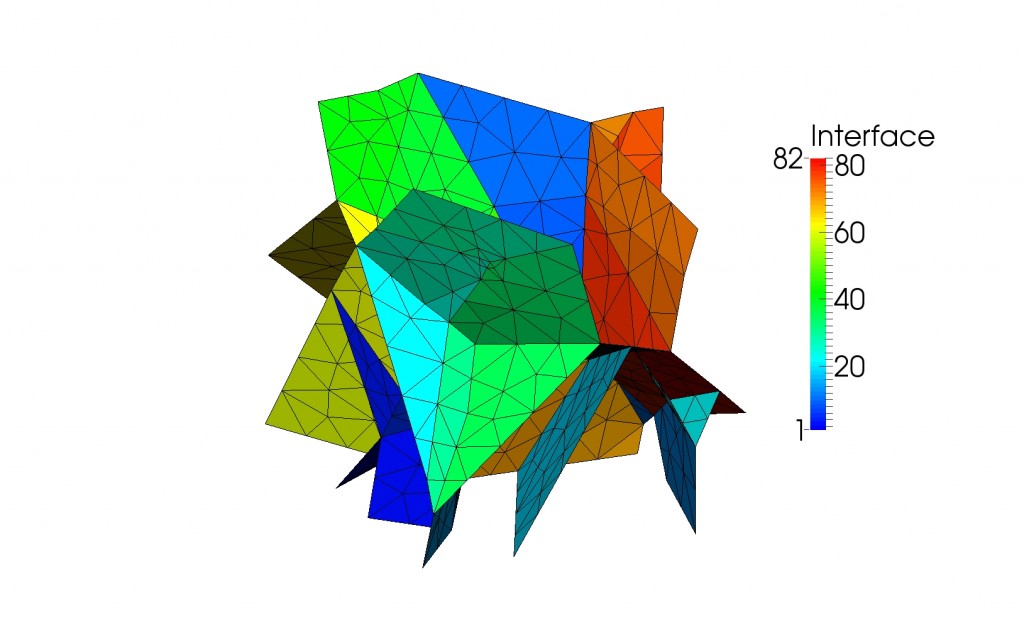 The program can be downloaded from Bitbucket at the development link below; click on the “…” in the upper right corner and select “Download Repository”.

BEAVER is a MOOSE application (written in C++) for modeling interfaces in solid mechanics problems using the Variational Multiscale Nitsche (VMN) and Discontinuous Galerkin (VMDG) methods. A key feature of VMDG is that the stability parameters (penalty term and weighted average numerical fluxes) are computed locally at each segment (element face-pair) along the interface using analytical expressions obtained from variational multiscale principles. Primary applications are for mesh tying, periodic boundary conditions, and debonding of interfaces, as a variationally consistent version of cohesive zone modeling approaches. Implementations of diffusion and solid mechanics (small and large strain) are being continually developed from the published formulations of our group.

Source code, documentation, tests and examples are found on the GitHub repository:

The flagship campus of the University of Tennessee System and partner in the Tennessee Transfer Pathway.